Find me also on:
Follow The Outlier Walk on WordPress.com

Is Iceland the most beautiful place on earth? (check my Iceland portfolio here, and tell me what you think)

I don’t know yet (will let you know in a few years though), but a lot of people seem to think so. Among them is Dave Grohl who stated Iceland is his favorite country on earth during the Foo Fighters concert this year.

And the festival guys clearly make the most of it. I mean, how could you possibly resist to a video such as this one:

But I don’t really want to talk about the waterfalls, the glaciers, lagoons, geysers, coastlines or national parks… Will leave that to later. I’m going to talk about my experience as a volunteers during the festival.

I was accepted for the role to Volunteer Crew Chiefs during the Secret Solstice music festival, that took place in June 2017 in Reykjavik, Iceland. Here is what I remember the most 4 months later, in a time that the 2018 edition is already being promoted – early bird tickets are now gone if I’m not mistaken.

Now you know about the music… The Secret Solstice music festival is a completely different experience. Imagine yourself in a place where it is never night time, full of people from all over the world (Iceland included 🙂 ).

First, the girls from the organization (there were probably guys too, but I missed them all) were the best. Huge kudos to them.

In the campsite, as expected, most of the people are from abroad. And trust me when I say you are going to meet people from all over the world… I mean ALL over. And then, you know what is going to happen…. you’ll meet amazing people, make friends, and that’s pretty much it, right?…

Olaf and Egill, The King of the North

Here is a couple of guys that will definitely help you make the most of the campsite. You may find them, year after year, midway between the showers, and the exit on the hostel side. They live 10′ away from the festival site, but the bring their tents to the campsite, along with a huge party tent and furniture, their own sound system, booze and anything you may need to party. They do this because they know that people traveling from abroad can’t bring of lot of this paraphernalia… So they bring it in for you, and everybody is welcome to join the party. Thanks guys.

There is a good reason why I mention this, it is usually the first thing to be left behind… If you are latin or from a mediterranean country, you can probably relate. The main acts take place at 22h, yet it is so sunny that it feels like 18h, so you don’t really feel like have dinner before that (or if you are alike me, you may simply forget about it). When it is over, it is about midnight and everything is closed already – so you either make friends with someone who has food back in the tent, or you’ll be having a hard time looking for a snack. So, the best time to have dinner? 18h30 if you like the 20h act, or around 20h30 otherwise.

This is where the really crazy stuff begins – the stage you go after the main acts, up until morning. So I’m not getting into too much detail here… use or imagination, or visit the Secret Solstice in 2018 :). Anyway, it is probably the only place you’ll see darkness – so don’t miss it.

Well, you can’t really miss it, but it is absolutely crazy to send several days, or weeks, without night time. Take a moment to enjoy it… it is worthy. 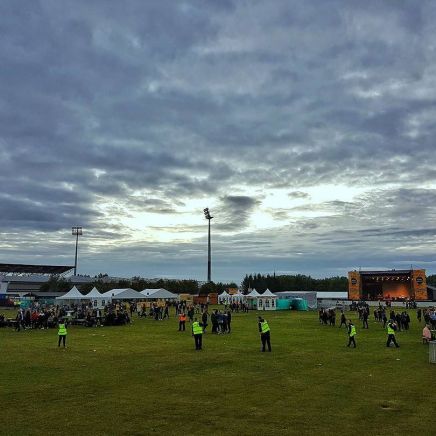 If you are worried about showers and hot water, well, don’t. I don’t think I have ever been at a festival so comfortable on this matter… and hot water is absolutely not a concern in Iceland. The campsite is great, large (maybe a little bit too large) and right next to the festival – well, bare in mind that I don’t know how it will be next year.

About the Application Phase
No trouble there. I submitted my application on the festival webpage, and the next week day I received an e-mail stating I was accepted for the role Volunteer Crew Chiefs. Totally straightforward… Oh, yes… After you are accepted you need to pay a deposit, that will be returned once you successfully finish your shifts. But since that process is quite clear from the beginning, it’s not really an issue.

Before the Festival
So, you are added to a Facebook group, where the volunteers may interact with each other. There were a few posts before the festival, but with really low engagement. I suppose there was not much the crew could do to make it more dynamic. Anyway, it is still a cool tool.
The best thing is that it is really easy to interact with the Volunteering Management team. They will answer any question without delay, and that’s pretty awesome.

Missed them all… The Glaciar party, the Lava Tunnel event, and the Midnight Sun Party on a boat… Yes, missed all of them. But you know what? I don’t regret it. I didn’t even think about it until after the festival – I don’t think I would be having a better time.

To close, I leave a word of appreciation to my team, for making my time at the Secret Solstice festival even better. Thanks guys 🙂 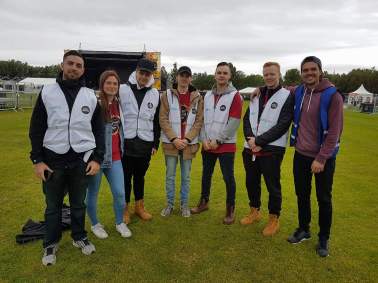 And of course, Iceland road trip